My top 3 most bizarre health checks in Japan

The annual health check. Also known as That Unpleasant Afternoon You Spent Being Scrutinized by Japanese Doctors Without Understanding A Thing.

Once a year, your company gives you a free ticket to a compulsory health check. It’s important for them to have healthy employees who can pull off solid overtime hours. And it’s also sort of required by law, so yeah. Either way, you get a free health check so all is good, right? Well, let’s just say that all that glitters isn’t gold.

You will be left in the hands of robot-like Japanese health care professionals who love nothing more than telling you things you’ll spend the next year ignoring. Did you know that drinking is bad for your liver? Did you know that eating chocolate every day is bad for your blood sugar? Were you aware that sleep, exercise and healthy eating habits are good for you? Yes? So Miss Foreigner, why are you such an oozing meat bag of unhealth then?

Okay, I agree we all need to hear hard truths sometimes. Personal betterment and all that. But there is absolutely no need for all other patients in the waiting room to hear them too. And they will, because privacy is not really a thing for Japanese hospitals – especially not when they are flooded with needy annual health check lemmings like yourself. Instead they use curtains, which I can assure you are not soundproof. In essence, everyone will hear the commentary on your terrible drinking habits. If the shame is not enough to make you change, nothing is.

So without further ado, let me walk you through some of the most bizarre health checks I’ve ever had. Buckle up.

First ones are special, aren’t they? Mine was in a small town in Hokkaido where the authorities had converted a gymnasium to a health check hub for the day. 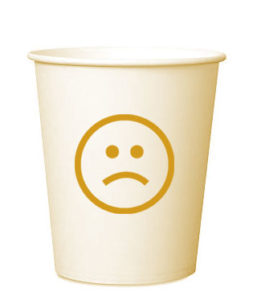 “Take this cup, pee in it, and walk across the hall to hand it in.” The nurse gave me a cheap coffee cup and pointed me in the direction of the toilets.

“Umm, sorry, b-but I don’t think…” I stammered, too flabbergasted to tell the lady she must be out of her mind to think I would actually walk across the entire gymnasium with a cup of piss.

Ten minutes later saw me clutching a lukewarm cup, gingerly walking across the silent hall with Japanese eyes following my every step. Still one of my top ten walks of shame.

After what seemed like an eternity, I made it to the pee lady (Tinkle Specialist? Piddle Controller? I don’t know) and gave her the cup, carefully. Ever so carefully. She looked down at it, seemingly surprised to find the contents to be hay coloured (as opposed to blue, as would have been natural for aliens like myself). I quickly walked away from her, happy to be done with the hardest part.

The Sacrificial Table of Doom

But it was too early to draw a breath of relief. Some genius staff member had seen it fit to place the blood test station smack-dab in the middle of the gymnasium, without curtains. I sat down in a make-shift waiting area with a fantastic view of all the people getting stabbed with needles. The table was only lacking candles and skulls to fulfil its potential as an altar of pain. 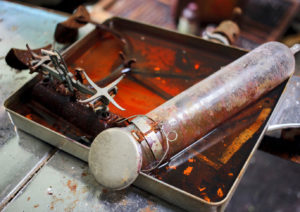 Watching eight obedient Japanese salarymen getting impaled by needles must have somehow drained the blood from my own body. Because the nurse couldn’t find my veins even after three tries. Not noticing my rising panic, she muttered something to her colleague about “foreigner” and “impossible”. The queue – my audience – had grown quite a bit by now.

Luckily, the freak show ended when a fourth attempt to tap my blood was made. It hurt so much that I jerked away, accidentality knocking over a dozen empty glass tubes in the process. Right onto the floor. Into a million pieces. Suffice to say my second walk of shame of the day was nothing short of mortifying.

But apparently, I needed to walk more. A lot more. Because the tiny nurses at the weighing station were not happy with my waist circumference.

“Your BMI is within the normal cap, but you have too much body fat. Your measurements are also above average. You should try to exercise and watch what you eat.”

“Yeah too much fat,” the other nurse echoed.

Well, who am I to turn down such friendly and professional advice? So that evening my supermarket basket had two bottles of umeshu (plum wine) instead of the regular, unhealthy rice crackers. One’s gotta watch what one is eating, after all.

#2 The Pink Room of Gloom

I rose from my seat in the waiting room and made my way to the door. This year I’d picked a modern clinic in central Tokyo and most of the tests had gone quite well. That is, until I entered The Room. 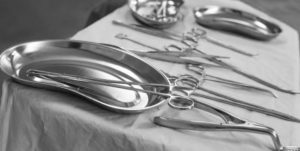 “Undress behind the curtain,” the doctor said disinterestedly without even as much as a glance at my face. Then again, I suppose it was not my face that interested her. I had somehow missed that this modern clinic included obgyn tests in their standard checks. Right. The pink-clad nurse ushered me behind the pink curtain with an iron grip, but not before I had a glimpse of an impressive assortment of shiny claw-like tools. Gulp.

Thus followed a followed a pleasant roller coaster ride through hell. I’ll spare you the grisly details, but Mr Bean’s Christmas Turkey episode comes to mind. If you haven’t been to a sadist – sorry, gynaecologist – in Japan, here are a few things you should know: they use curtains so you can’t see what they’re gonna do, when they’re gonna do it, and with what they’re gonna do it. The suspense is only punctuated by a) your own gasps/screams and b) a “relax please” from the other side of the curtain. Not for the faint of heart. 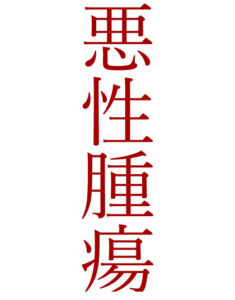 The results came back with an E (yes, they will rate your various functions from A-F. If you’re deemed too unhealthy, your boss might be notified). So there I was, back in the horrid pink room.

“You have long-medical-term-in-Japanese-that-is-impossible-to-understand,” the doctor said.

“Long-medical-term-in-Japanese-that-I-don’t-understand?” I repeated, instantly flipping up my phone and Google translating it. Didn’t help. The English was equally unintelligible.

She sighed – a sign of true professionalism – and went on to scribble down the kanji characters for the word. As if an assembly of stick men on paper would somehow be easier for a foreigner to decipher. In the end she just gave up and told me I had cancer (which it turns out I didn’t). But I still had to visit a bigger hospital with a bigger pink room, and pay almost 17000 yen for a completely unnecessary biopsy that came together with a half-cooked apology. “Sorry, a mistake was made.”

My score to them is a huge F. Be my guest to guess what that stands for. 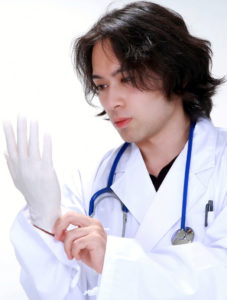 In my eternal ignorance, I signed up for a breast cancer check a few years back (since I am apparently that age now). For normal people in normal places that would encompass getting your bits squeezed by a machine. Easy-peasy. But I forgot this is Japan, and I am one unlucky fool. So imagine my surprise when I entered the room and was met by a young doctor ready to squeeze me with his bare hands. A fresh graduate. With a sad little stubble. Great.

I’d become pretty jaded by now, but luckily our budding little doctor was nervous enough for both of us. His eyes flickered across my face like a scared bird and he licked his lips nervously before asking me to “please take off my bra”. Not too convincing coming from a guy who smells like virginity, I must say. I sincerely doubt he’d ever touched actual boobs, and was surely not about to let mine be the first. “Please,” he repeated.

It was too much. The laughter came bubbling out of me, helplessly. To his credit, he kept a straight face and suffered through it with the dignity of a hurt puppy.

“Ah, I’m sorry, I just got a bit nervous,” I managed, gasping for breath. “I’ll have to pass on this examination. Excuse me,” I added in a last-ditch attempt to be polite before fleeing the room. Not my most dignified exit. Sorry, puppy doctor.

Nothing is really free. This is doubly true for the annual health check. I stand by my theory: if it ain’t broke, don’t fix it. My cholesterol might be a C. My drinking habits probably an F. But last time I checked, my head was still on my shoulders. And that’s enough for me.